Sleep is key to maintaining a healthy lifestyle. It is estimated that a third of the adult population suffers from mild insomnia. Lack of sleep can result in the decrease of daily-functioning skills, such as memory and mood stability. It also puts individuals at a higher risk for traffic accidents and other forms of injury. Using prescribed or over-the-counter sleeping pills for a prolonged period of time can have negative side effects on your health, such as erratic behavior (i.e. sleepwalking,) balance loss, and an inability to establish a sleep routine after taking the drug. Because of the side effects, many people turn to natural remedies for insomnia. Below is a list of the best herbs to use as a natural sleep aid. 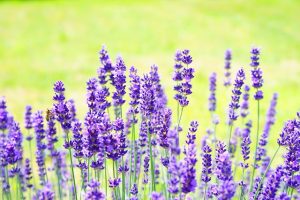 One of the most well-known sleep aids, lavender promotes better sleep by slowing the nervous system to induce a state of relaxation. The herb is also commonly used to calm nerves and reduce stress. Lavender is native to Europe, Africa, and Asia and for centuries has been used for medicinal and culinary purposes.

A study by Southampton University in England showed favorable results towards lavender helping individuals with mild insomnia experience better sleep. Women and younger participants in the study had up to 20% improvement in their quality of sleep. The most common way to use lavender is through aromatherapy, such as oils, sprays, and incense. It can also be ingested through drinking the herb in tea.

Chamomile is a plant from the Asteraceae family and has a daisy-like appearance. Historically, chamomile has been used in medicine to treat gastrointestinal issues and skin conditions. While chamomile has been dubbed a sleep aid for years, there’s a shortage of scientific proof showing that chamomile directly causes sleep.

Rather, studies show that chamomile could have an anti-anxiety effects, which help individuals relax. So if your insomnia is anxiety related, chamomile could be an effective sleep aid for you. Chamomile is most commonly consumed in the form of tea or herbal infusion.

There are over 500 species of passion flower that can be found all over the world. In North America, the maypop species was used in traditional medicine by the Native Americans. Today, the passion flower herb from maypop is still used as a natural sedative.

Similar to chamomile, there’s no direct link from passion flower to sleep, but rather in studies, it’s been shown to reduce anxiety, allowing individuals to “turn off” their brains and relax enough to fall asleep. Passion flower can be ingested through capsules or teas.

Valerian is a perennial plant native to Europe and Asia. Its root has been used as a medicinal herb for sleep since Ancient Greek and Roman times. In modern times, studies have shown that valerian root is an effective sleep remedy, In a study by the Swedish Foellinge Health Center, 89% of the study’s participants experienced improved sleep after taking the herb.

Valerian root induces sleep by boosting your brain’s gamma-aminobutryic acid (GABA) level. GABA is a neurotransmitter that regulates messages between brain cells and to the nervous system. An increase in GABA levels slows down this communication, causing sedation. Valerian root can be combined with other relaxing herbs and is safe for children to use. It can be ingested through teas or capsules.

A surprising sleep aid can be found in your favorite IPA beer. Hops, which is a seed cone that gives beer its bitter flavor, contains methybutenol. Methybutenol functions as a natural analgesic and sedative. Hops are native to Europe and western Asia.

Because of this sedative effect, hops is used to minimize restlessness and anxiety, which can improve the ability to fall asleep. Hops can safely be paired with other herbs and is commonly paired with valerian root to create a more powerful sleep aid. Hops can be consume through a capsule, tea, or even a non-alcoholic beer. While alcoholic beers contain hops, they have other properties that can disturb sleep patterns.

One sleep product we really like is by a company called Pure Nootropics, as their sleep complex contains many natural ingredients meant to assist with healthy sleep.