During the 1928 U.S. presidential election, Herbert Hoover made history when he ran under the Republican Party’s ticket. This resulted in a decisive victory against the Democratic candidate Alfred E. Smith, then serving as the governor of New York, with a record margin of 444-87 electoral votes. In securing his Presidency, Herbert Hoover carried 40 states further solidifying the voting public’s decision. 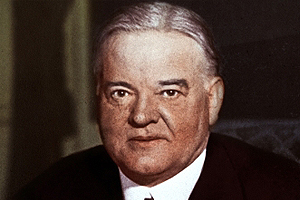 Herbert Hoover ran on the promise that he will sustain the same level of prosperity and peace that the American public has become accustomed to in the decades previous. His inaugural address was tinged with the same level of optimism and hope saying “I have no fears for the future of our country.  It is bright with hope.”

Of course, by now, it is common knowledge that only a few months into the Presidency, the American Stock Market experienced a dramatic crash. This signaled the start of the Great Depression as the entire global market plunged into a state of crisis. This left the entire nation in the quagmire of widespread poverty, joblessness, and despair. Yet, despite it all, the Hoover Presidency stood its ground and weathered the storm.